Letting Mistakes Refine You – Not Define You 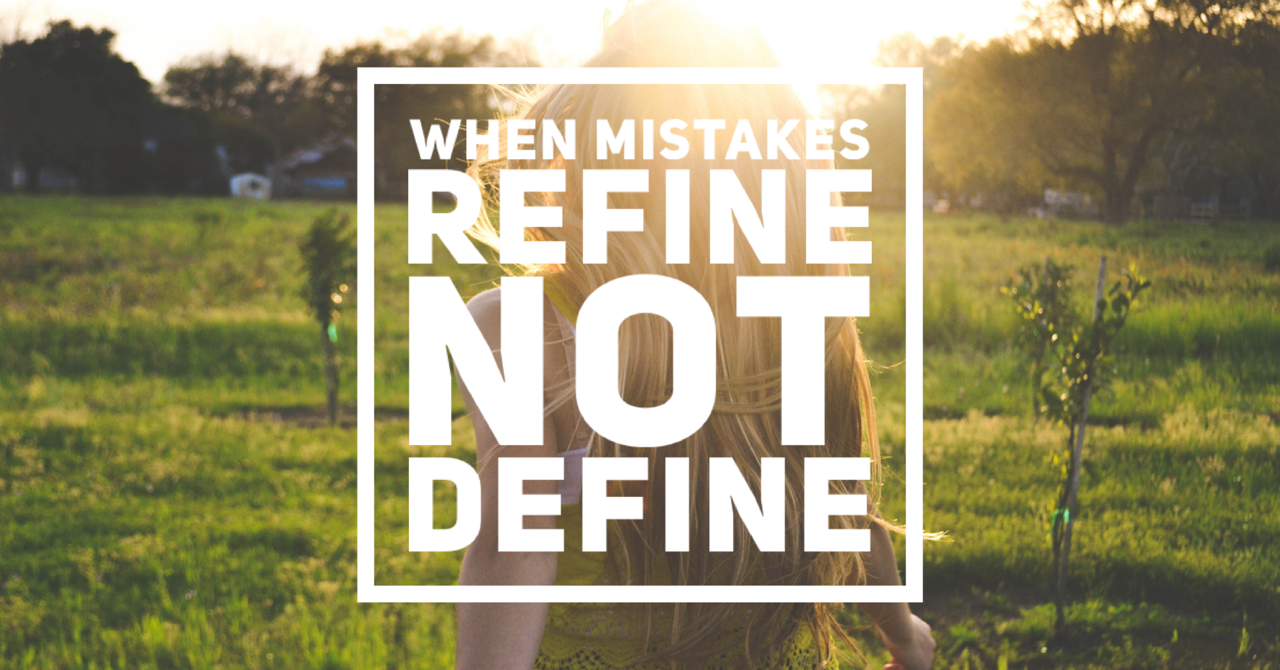 She wasn’t my child, but I felt my heart swell with mom pride as I watched her perform. She sang with a full, strong voice and owned the stage with confidence. I found myself pulled into her character until….sudden silence…she forgot her lines.

Her performing face dropped into panic as she looked towards the prompter and, after a few beats, picked up where she left off.

I said a silent prayer for her: “Don’t let this take you off course, sweet girl. Keep on pressing into what you know. Be strong. Be brave. Don’t let this slip up define your performance!”

After a few haltering lines, she pulled through, resuming her confident glow.

The show was about being who God made you to be; not trying to be someone you aren’t. It was a perfect message for the kids who performed it, and as I watched the songs unfold into a story, I realized these 45 minutes were speaking to me, too.

The transitions I’ve endured over the five years have made me acutely aware of who I am, and who I am not.

I will never be an expert at crafts. My house, though functional and cozy, will never be featured for its sense of design on HGTV. I bake good cookies my kids love, but are not pretty enough to sell. My knees won’t allow me to run a 5K any longer, and my penchant for chocolate and ice cream means I will never be a super model.

What has caught me off guard is how God has been showing me the gifts He HAS given me, and the importance of being diligent to pursue them. I’m excellent at details, as well as seeing the truths that create the big picture. I love to read, study and learn. I treasure nurturing my family. And ultimately, all of these feed into an overarching gift, which is writing.

I’ve been investing more of my time into these callings, and actively trying to live them out — but I make mistakes. I get distracted. I forget my purpose. Then the litany of self-contemptuous thoughts race through my mind, making me focus on how badly I messed up, rather than the times I succeeded.

I have trained myself to be self-critical; to analyze interactions, and my words, and my responses. Instead of reassuring and refining me, these thoughts end up bullying me, making me feel like a failure, time and time again.

I know I am not alone.

As a boss, there were many times our staff made mistakes. I could see the bad news on their faces before they spoke a word. We did our best to address each issue with grace, love and instruction, which ultimately made them into stronger employees.

Amongst girlfriends, it’s common to hear complaints about a short coming; or a flaw with their appearance; or a gaff they made at work. Self depreciating humor is part of our culture, but it can become such a habit it becomes a destructive part of our internal monologues.

So, what’s a better way?

I think it begins with focusing on who God says we are, and letting ourselves be defined by those solid truths.

As Christians, we are called by God to do the things He created us to do. He promises to equip us with all we need, to complete the task at hand. (2 Cor 9:8)

He says we are loved, and accepted and treasured. When we step out on faith and pursue these callings, the Bible says God delights in it. (Psalm 37:23)

Pursuing our callings can be a bumpy road. Maybe that’s why one of my favorite parts of the choir performance was the moment the actress forgot her lines. Instead of slinking off the stage, or collapsing into tears, or throwing her arms up in the air in a fit of disappointment, she kept going. She kept pressing forward until the flow returned, and it was as if the blip never happened.

I believe that blip was for a reason. It was for the people like me, who needed the reminder that, just because you fall, doesn’t mean you’re on the wrong path. Sometimes our stumbling tells a story to the people surrounding us. They might need to watch you make a comeback, to have faith they can, too.

2 thoughts on “Letting Mistakes Refine You – Not Define You”